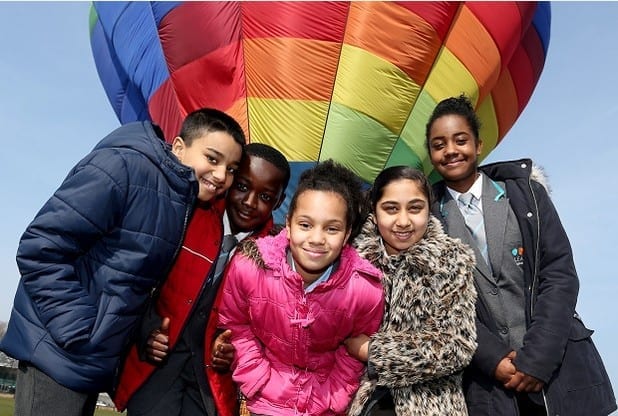 School children from Nottingham soared 70 feet above the Forest Recreation Ground as masses of hot air balloons took to the skies as a part ofthe forest’s heritage project.

Following the forest’s 150th birthday, a number of local schools were asked to take to the skies in a number of hot air balloons, which regularly took flight from the park in the past.

The students, who visited from four different schools, not only got to fly in hot air balloons, but they were also given a lesson on forces, and learnt about the failed attempt at a hot air balloon flight, which took place at the site way back in 1785.

Victoria, a 10-year-old student who took part in the event, told The Nottingham Post:

“It felt like we were giants. We went up really high and buildings looked really small. It was really good but at the same time really scary.”

“I liked the way it rose up and you could look down. I waved to my friends, they all looked really small.”

The children went up in the air with the aid of a couple of 16 million thermal unit burners.

The balloon launch was the first part of a bigger learning project taking place in the forest – children will also be invited to nature camps, shelter building and a forest school.