The 21st November marks the 236th Anniversary for the first untethered hot air balloon flight.  François Pilatre de Rozier and François Laurent, marquis d’ Arlandes flew for approximately 5.5 miles over Paris on 21st November 1783.  Their balloon was made from cloth by two brothers Jacques-Étienne and Joseph-Michel Montgolfier – inventors of the world’s first successful hot air balloons.  Joseph and Étienne Montgolfier ran a prosperous paper business in the South of France. which financed their interest in scientific experiments. 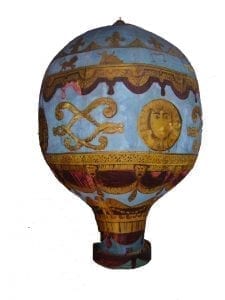 Model Of Balloon Built By The Montgolfier Brothers, Photo: Wikipedia

In 1782, the Montgolfier brothers discovered that smoke from a combustible material burned under a lightweight paper or cloth bag would make the bag rise into the air.  We know now that it is in fact the hot air that makes the bag rise but their mistake did not interfere with their research and inventions of the balloons.

The first ‘passengers’ to fly on 19th September 1783 were a sheep, duck and a rooster! The animals were used to test the effects of flight at high altitude on the body, before sending a manned flight.  The sheep called Montauciel (“climb-to-the-sky”) was chosen  as it was believed to have near human physiology.  The duck was chosen as it already flew at high altitude and the rooster was a third control which cannot fly.

The balloon, painted azure blue and decorated with golden fleurs-de-lis, lifted up from the courtyard of the palace of Versailles in the presence of King Louis XVI. The barnyard animals stayed afloat for eight minutes and landed safely two miles away. 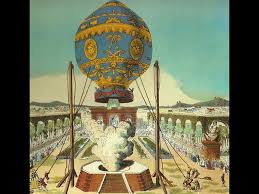 On October 15, Jean-François Pilátre de Rozier made a tethered test flight of a Montgolfier balloon, briefly rising into the air before returning to earth. The first untethered hot-air balloon flight occurred before a large, expectant crowd in Paris on November 21. Pilátre and d’Arlandes, took to the skies from the royal Cháteau La Muette in the Bois de Boulogne and flew approximately five miles. Humanity had finally realised the dream of flying.
The Montgolfier brothers were honoured by the French Acadámie des Sciences for their achievements.

Balloonists all over the world to celebrate Montgolfier Day each year on the 21st November.  In 2013 Clive Bailey received the Montgolfier award from the Western Region Balloon Club for his services to the ballooning industry and tonight Jo & Clive are hosting a Montgolfier celebration dinner with their pilots and crew.

236 years on, hot air ballooning is still a fascinating and breathtaking experience!  You can experience the thrill of flying over beautiful towns, cities and countryside with Bailey Balloons on one of their Hot Air Balloon Flights from Bristol, Bath or South Wales or treat a loved one to a hot air balloon flight voucher to celebrate a special occasion!